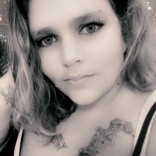 Its no secret that non-white representation is sporadic in the mainstream comic book industry.

From Marvel to DC, the amount of POC we see in the popular titles is limited, and even then, most of them are men: Cyborg, Black Panther, Falcon. But with the upcoming groundbreaking solo title for Riri and Shuri, I felt like we should focus on more women of color. Specifically, the women in the DCU that need a chance to steal some spotlight for themselves.

With the recent successes of Black Panther and Wonder Woman, both two major milestone films for the Big 2 in diversity representation, I’m hoping to see more and more branching out in their popular sales. We’ve seen these films make waves with audiences previously untapped or underwhelmed by the textbook superhero films we’d been receiving, and DC in particular has an odd struggle between their inability to represent minorities while having a plethora of under-used characters.

Created by J.T. Krul and Nicola Scott, the teen from Dehli, India made her first appearance in 2010 in Teen Titans #88 with an unnamed cameo alongside Aqualad. We learn her civilian identity, Kiran Singh, in November of 2010 in Teen Titans Vol 3 #89. Her introduction as Solstice comes still later, in 2011 during Wonder Girl Vol. 2 #1. Originally with a beautiful costume made up of bright golden material, much of her powers seem to revolve around the ability to harness the energy of light to pack a powerful punch! During the New 52, while her abilities remain the same, the change to resembling black smoke and blue light has led to some interesting theories about representing both the summer and winter solstice.

Dr. Angela Spica was born in Queens and holds an impressive PhD and career as a physicist and technologist. When the original Engineer, a real-life acquaintance is killed, Spica replaces her blood with liquidized metal made up of a ton of intelligent devices. The transfusion gave her the abilities that make her the Engineer. She’s able to will the metal to cover her body and fly. It also allows her to create radio-telepathy bugs, weapons, additional copies of herself and much more. Based on a previous character created by Warren Ellis and Gary Erskine, Steel Rain (2099 Unlimited #9), Angela’s first appearance is in the 1999 first issue of The Authority. 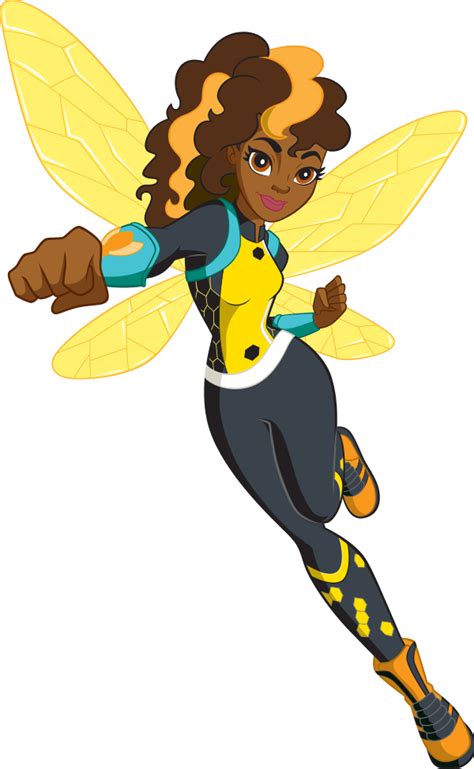 Karen Beecher-Duncan, superheroine extraordinaire and married to Vox on New Earth. Bumblebee first appears in Teen Titans #45 (1976) by creative team Bob Rozakis and Irv Novick. Her appearance is Bumblebee comes in Teen Titans #48 the following year. As a member of both Doom Patrol and Teen Titans, Bumblebee may be one of the better known, albeit underrated, WOC characters in the DCU. Her recent transition into DC Superhero Girls has boosted her popularity, as well as her inclusion in the DC Bombshells. While her powers originally were derived from a supersuit that increased her abilities to superhero-levels, Bumblebee now is credited with the power of flying and hypersonic blasts. She’s also able to reduce her size, and is credited with being one of the smartest characters in the DCU.

Miiyahbin Marten is a Cree teenager from Canada, and a member of the Justice League United. With powers that change with the seasons are based in the elements, she’a formidable opponent with a ton of untapped potential. Created by Jeff Lemire and Mike McKone, her first appearance is Justice League Unlimited #0. With the powers of Midayo, the seven pillars of Cree life, she protects her people with Whitago, the dark pillars. 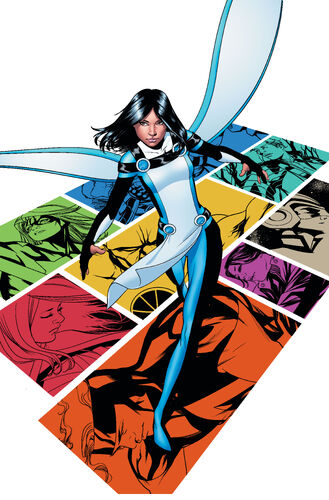 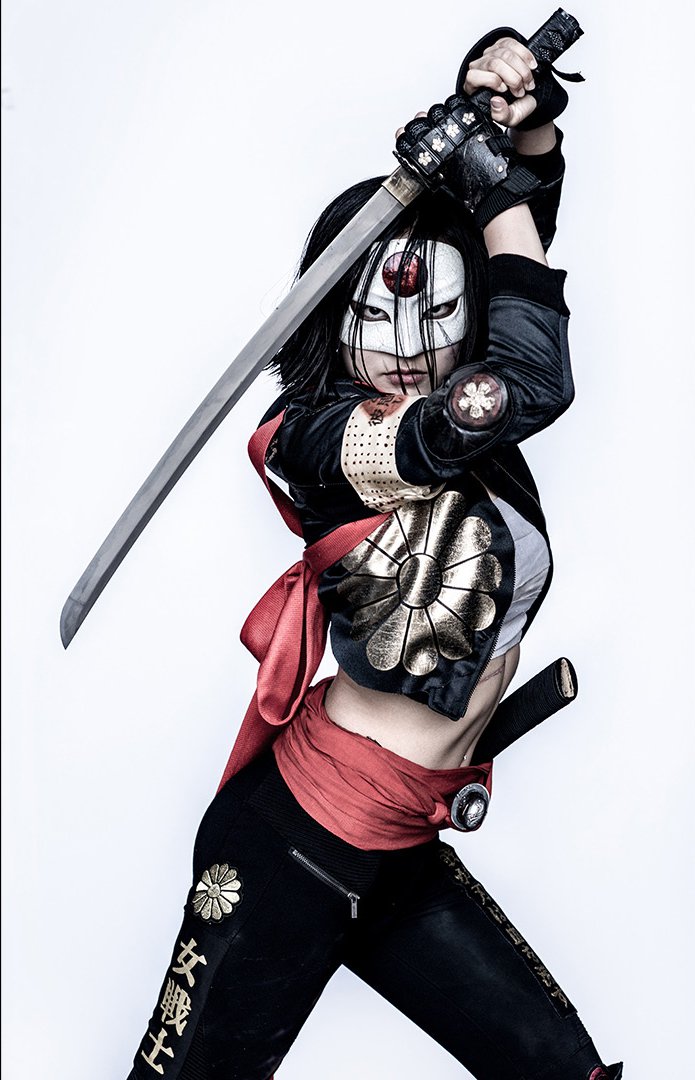 With a name that’s both an homage to and as strong as the weapon she wields, Katana may be the best-known WoC at DC. Largely due to her part in Suicide Squad, the Japanese powerhouse is also part of the popular DC Superhero Girls line. She boasts affiliation with the JLA, the Outsiders and Birds of Prey. Her first appearance in The Brave and the Bold  #200 comes at the hands of Jim Aparo and Mike Barr. Tatsu Yamashiro lost her husband to the sword of his brother and her children in a fire in one fell swoop, and escaped to America to become a master swordsman for justice. Her katana, and namesake, was possessed by the spirit of her husband, as the blade has mystical properties that contains the souls of those it kills and allows communication with the wielder. Katana is also a master martial artist. 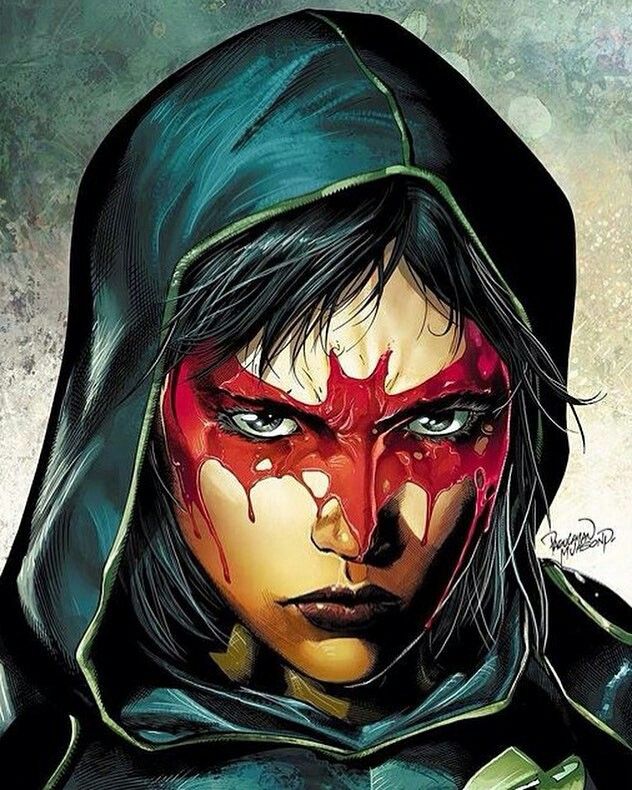 Kelley Puckett and Damion Scott introduce us to Cassandra Cain in Batman #567, as one of Oracle’s agents in Gotham City, and during this No Man’s Land crossover she is granted the mantle of Batgirl. Her new name, Orphan, comes at a later date in the New 52 as a family name. Her parents, David Cain and Lady Shiva, raise her to be non-verbal completely, training her to be the ultimate bodyguard for Ra’s al Ghul. After regaining the ability to speak, she was forced to learn defensive skills from Batman to make-up for the loss of her ability to ‘read’ people’s movement, and later takes on a deal from Lady Shiva to regain that ability without losing her newly found voice. Orphan has no superpowers, but like the rest of the Bat-family, has an arsenal of martial art and fighting skills, as well as various gadgets throughout her career.

After Karen Starr returned to Earth 2, Tanya Spears takes up the mantle of Power Girl on Prime Earth. At 17, Tanya was a postdoc at MIT and later worked at Starr Labs, where she assisted Huntress in the retrieval of stolen isotopes. Along with her genius level scientific intelligence, Tanya also has the powers of flight, super strength, size increasing and invulnerability. Her first appearance was World’s Finest #23 in 2014, and was a member of Teen Titans before going solo. 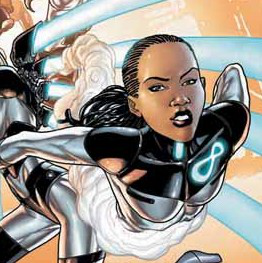 The niece of a hero named Steel, Natasha takes her uncle’s name after he’s injured and makes her appearance in Steel Vol. 2 #1, and her first official Steel appearance in Action Comics #806. With her persona changing over several years, Natasha’s talents and powers vary wildly and include force fields, super strength and transforming into a gaseous substance. Created by Louise Simonson and Chris Batista, Natasha is affiliated with Infinity Inc, Team Superman and the Titans. The New 52 has her in a relationship with Traci Thirteen, another young DC heroine with magical abilities. She is also known as Starlight (52 #21) and Vaporlock (Infinity Inc Vol. 2 #8). 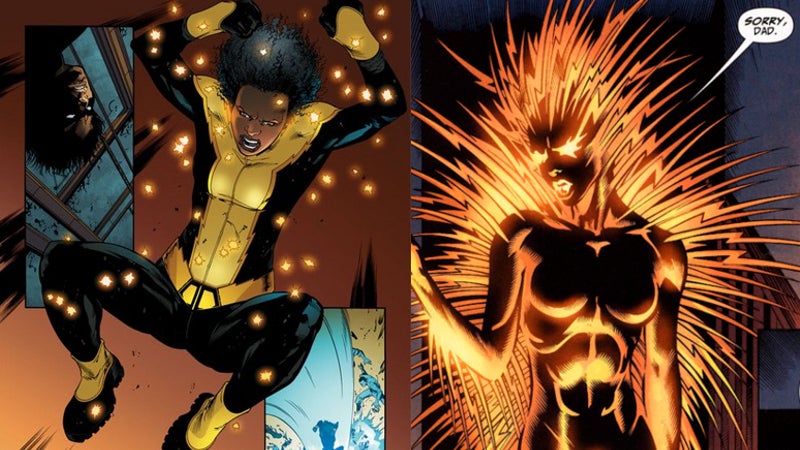 The daughters of Black Lightning, Thunder and Lightning are introduced at different times. Anissa Pierce (Thunder, left) is the eldest of the two sisters, created by Judd Winick and Tom Raney with her first appearance in Outsiders Vol. 3 #1. With her metahuman abilities, she can manipulate her physical density and create shockwaves by stomping on the ground. She is also in a relationship with Grace Choi (see below.)

Jennifer Pierce (Lightning, right) is the youngest Pierce sister. Her abilities include the power of flight and electrical manipulation. First appearing in Kingdom Come #1, Lightning was created by Mark Waid, Alex Ross, Geoff Johns and Dale Eaglesham. Unlike Thunder, who is affiliated with the Outsiders, Lightning is tied to the Justice Society of America.

Also created by Judd Winick and Tom Raney, Grace Choi made her appearance in Outsides Vol. 3 #1. Before being recruited by Roy Harper into the Outsiders, Choi used her superhuman strength, durability and healing powers as a nightclub bouncer. She comes to later learn she’s a descendant of a tribe of Amazons, explaining her abilities. She is also affiliated with the Birds of Prey.

DC Comics has a wide arsenal of lesser-known heroines, and this list highlights the woman of color introduced across time. With the tides changing in the comic industry, I’m hopeful that more of them will make frequent appearances in popular titles and TV shows, and that DC will begin to utilize the vast roster they have stowed away. 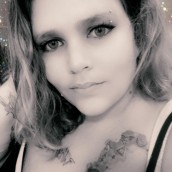