Atlanta based starchild with an insatiable love of all things…

What Is The Right Essential Oil For You? [Quiz]

Afro-Futurism is an interesting concept: it’s a cultural aesthetic, a literary genre, and a social movement, for starters. And since its conception in the 1970’s (with the famous Sun-Ra and his psychedelic music) it’s been gaining prominence in areas of fashion, music, and film in the black community. 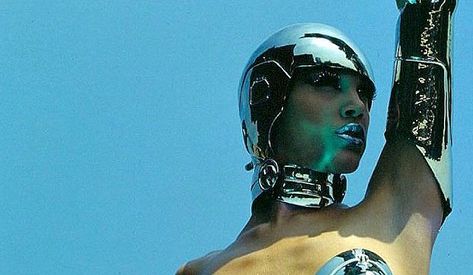 But what exactly is Afro-Futurism? And why is it so important? Well, for one thing, it’s given a voice to those of us who—for the longest—were invisible in science fiction and fantasy spaces. For a large part of history, science fiction was framed upon a white-lensed notion of the world—and its possible future—which isolated people of color and made it difficult to gain representation. How could it be that, in worlds of aliens and spaceships and fantasy, people that looked like us were still few and far between?

Over the years, black people have answered that question by breaking off from the status quo, and transforming the conventional idea of science fiction into a concept that combines traditional African heritage, magical realism, and socio-economic exploration of the black experience into something entirely new and unique. Singers like Janelle Monae, for instance, have been trail-blazing the genre in the music world. In Monae’s music, her android alter-ego “Cindi Mayweather from the year 2719” explores issues of gender, sexuality, and historical oppression through catchy electro-beat music, and stunning aesthetics that take cue from such films as Metropolis and Blade Runner. Overall, she oozes black girl magic and eclectic fantasy. There is a magnetic retro-futurism aspect to her songs that, when listening, makes you feel like you’re smack dab in the space age, ready to take on some wild new cosmic adventure.

Fashion icons like Willow Smith and Erykah Badu also draw upon this movement through their inventive fashions that combine African bohemia with sci-fi elements. Willow herself is an avid fan of the film Avatar, and incorporates much of the tribal Afro-Futurism present in the N’avi alien race into her hair, makeup, and—of course—music. Often times, she looks as if she herself has popped right out of a graphic novel, exuding the vibe of an alien heroine in a space opera.

#Coven: Spooky Gemstones Every Witch Needs to Carry on this Hallows Eve!

If you’ve been to AfroPunk in recent years, you’ve definitely felt the Afro-Futurism influence within its spaces. Tribal makeup, inventive fashion, and whimsical music are at the forefront of this festival, and when attending, it often feels as if you’ve transcended into a new dimension, and stepped foot into a futuristic utopia of collective love, artistic expression, and ethnic celebration.

With the announcement of the impending Black Panther film, several black led sci-fi films/shows (Star Trek Discovery, A Wrinkle in Time, etc.) and the continued evolution of alternative music in PoC spaces, Afro-Futurism only seems to be gaining more influence and acclaim in the mainstream. As a movement that encourages creativity and reinvention, one can only wait excitedly to see where Afro-Futurism will take us in the near future.

Atlanta based starchild with an insatiable love of all things sci-fi, rock, geeky, and Jeff Goldblum.