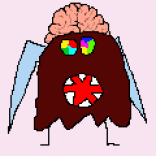 When it comes to painting your face in cosplay, there are several acceptable colors. Pink is a cute color. I’ve always been a fan of orange, honestly. Green is a popular one.

But if you find yourself picking up some foundation in the shade “mocha”, while you’re usually more of a “beige” or an “ivory”, you might want to rethink that decision.

But perhaps I’m getting ahead of myself.

For those who aren’t in the know, cosplay is the act of dressing up as a character from a book, movie or tv show, particularly amongst anime and manga fans. These costumes range from simple to elaborate. From entirely new creative takes on classic characters to costumes so accurate that even the buttons are identical to the source material. There is no singular way to cosplay.

It's Showtime! Gonna be posting halloween looks and videos for the rest of the month! Stay tuned for a NEW video tonight ( not this look but hopefully something you'll enjoy:) 🎃🕷🕸 Customized Lace Full Comfort wig unit in w613 by @itsawigdotcom ! #cosplay #blackgirlmagic #blackcosplayersrock #blackcosplay #beetlejuice #halloweenmakeup #halloween

Cosplay can be a great way for fans to not only showcase their ingenuity and creativity but also to show their admiration towards a specific fictional character.

However,cosplay is not an excuse to act a damn fool.

A long-standing controversy throughout the cosplay community, is whether or not “raceface” is an acceptable practice.

“Raceface” is painting your face to match the ethnicity of the character you’re cosplaying. Cosplayers, such as Kira Markeljc who cosplayed as the definitely NOT caucasian Michonne of The Walking Dead,  in the past have found themselves in hot water doing raceface.

“But, what’s the big deal?” you may ask. “If the character is Black/Asian/Latino/etc, shouldn’t your costume reflect that?”

Now don’t get me wrong, I do believe that cosplayers shouldn’t stop dressing up as characters just because they don’t look exactly like them. If you’re chubby and want to cosplay as Ariel, you better work that seashell bra! If you’re skinny and want to rock a Rose Quartz look (pun intended), then you do your thing. The same thing applies to race.

If you’re white and want to dress as T’Challa, please feel free. But when it comes to the application of blackface, that’s where things crossover into problematic territory.

Raceface, blackface in particular, has a long history, not limited to the United States. Gaining popularity in the 19th century, blackface became a popular form of entertainment, allowing non-black performer’s to dress as caricatures specifically designed to mock and demonize Black people. Minstrel shows were usually where blackface was showcased.

And while Minstrel shows in the United States are pretty much extinct, the act of blackface, unfortunately, lives on. And, even more unfortunately, it’s an international phenomenon.  Yes, ladies and gents, this sh*t is global and still very, very present. Korean sketch comedy shows, such as “Gag Concert”, will sometimes use blackface in a similar fashion to those of Minstrel shows.

Everywhere from Canada to Thailand has their own traditions and controversies surrounding blackface.

And while raceface in cosplay isn’t “inherently” mocking or used to portray negative stereotypes, it’s still a practice that is and should be frowned upon because it is ultimately unnecessary.

Raceface in cosplay, however unintentional, is merely a callback to an outdated and racist practice that should’ve been buried long ago.

There are several Black cosplayers that dress up as non-black characters without the aid of paint. It’s the accuracy and craftsmanship of your costume that will determine recognizable your cosplay is. Not your skin tone.

5 Films That Actually Started As Fanfiction

I’m just saying that there’s a reason you don’t see many Black cosplayers walking around looking like this.

Cosplayers, who’re also people of color, often are forced into a situation where most of the characters they want to cosplay as don’t share their skin tone, especially for anime and manga fans.

But their cosplays still turn out amazing because their love for their craft and the character shines through.

So, continue on cosplaying whichever character you please! But perhaps let’s leave the raceface back in the 1800’s where it belongs.