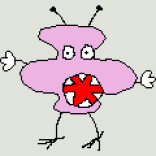 In the year of our Lord, August 8, 2018, Editor David Kirkman released a clip of something we have all been waiting for: the return of Static Shock.

Kirkman posted the exclusive clip on his Facebook page, which was shared by the Static Shock Short Film page before it spread like wildfire. If you have not seen it, please watch this clip from Kirkman’s Youtube Channel, Vanguard Studios and get 1:30 of life.

We get to see Maalik Shakoor take the role of Virgil Hawkins in his iconic yellow and blue. Of which, his  yellow hoodie proudly says in the clip “Black Men Smile Too”.

The short film, according to its Facebook page, is scheduled for released on September 20, 2018 in St. Louis, MO and is COMPLETELY FREE. To see this event, you will need a ticket, so like their page to be the first to get hip.

The first clip of the short film initially released 2 months ago and got a whopping 4.4 million views, the two videos after didn’t have much hype. With shows like Luke Cage and Black Lightening, it is good to see a more positive light shown in regards to the representation of Black men.

Considering how close and how quickly production is coming together, we need to be on guard for any other hidden gems Kirkman may have up his sleeve.

Maybe this will open the door to a long awaited TV reboot or a movie!

Recasting Call: Five Heroes of Color Who Paved the Way

Afro Samurai Champloo: The Newest Joint Project On The Market

The Only Biracial Character I Have Related To